When Does Maple Sap Run?

What Causes Maple Sap to Run?

A sugarbush is a forest stand of maple trees used in maple syrup production.

The sugar maple tree produces maple sap with a much higher sugar content concentration than the red maple. However, red maples have a greater flow of sap.

Before sap collection starts, sugarhouses will begin to check their taps and prep their evaporators.

Gallons of sap run can drip from tap holes—into spiles with hanging buckets (or bags) or spouts attached to tubing.

The best sap is collected at the beginning of the season when the cycle of warming days and freezing nights causes a rotating cycle of positive pressure and negative pressure within the sapwood.

Sapwood is the softer outer layer of wood between the heartwood and the bark. These wood fibers contain the vascular tissue that allows the sap to flow up and down from the roots to the crown of the tree. Maple syrup is made from the sugar content in maple sap.

Sap collected at the end of the season often produces darker syrup and could have a buddy taste. The term buddy refers to a bitter taste that occurs in maple sap after the maple tree starts budding leaves. 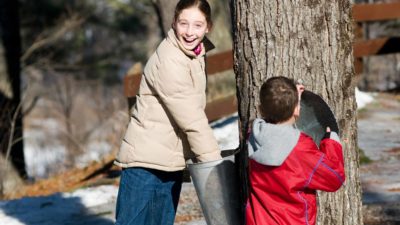 Learn How to Make Maple Syrup

Start a new family tradition together. This complete guide contains everything you need to know to learn how to make maple syrup.

Maple syrup producers must be ready with their taps and collection equipment.

The season doesn’t stop when the sap runs stop.

After the sap is collected, the process of boiling and evaporation transforms the maple sap into maple syrup.

Bottling is the next-to-last step in the maple syrup season.

As the final step, sugarmakers remove their taps from the maple trees.

March is supposedly the best month for tapping maple trees. The season can last until April when the nights no longer freeze. At that time the sap runs stop.

The Massachusetts maple syrup production season usually starts in mid-to-late February in the lower western parts and eastern parts of the state. In the western Massachusetts higher elevations, the season may not start until the first week of March.

Get Ready for the Sap Run

Gather your maple sugaring equipment and get ready to collect maple sap this winter/spring. This can be a fun family activity or a great way to get out of the house and into nature.